A list of 300 people evicted from Strokestown Estate.
Co. Roscommon

This list of 300 names was published by the Bishop of Elphin.

“The Strokestown Massacre Developed” A few years ago I was over in Strokestown house with some friends and being me I was photographing everything.  I have never published this list before it was hanging on the wall.  I am now loading these photographs at full size so that any whose families were evicted can see that this list was published in the Freeman’s Journal 29th April 1847.  The editorial was entitled “The Strokestown Massacre Developed” 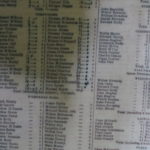 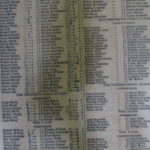 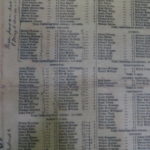 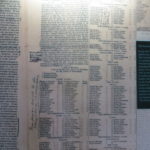 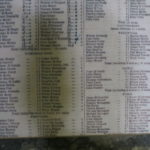 We do have some old newspaper abstracts on this website (which can be found here) and I always remember one day as I was copying some material in the National Library in Dublin laughing to myself because life had not changed that much.  The bit I was transcribing was advising people to take their keys out of their front doors because thieves were just able to walk into houses.  The thing is, the paper had been published in the 1830’s, and then it was about 2006, and only that week my mother had begun to bring her car key into the house at night instead of leaving it sitting in the car.  My mother was a medical Doctor and getting called out at night was a regular thing so leaving her key in the car saved her the trouble of having to look for it when called out.

Ireland Old News – a newspaper site giving ‘abstracts’ from Old Irish Newspapers. Came across this website earlier today (I had forgotten it!)  and I am or was the 399248th visitor since the year 2000.

We tend to forget the things that so many people have done, especially in this day and age of advanced technology.  Many of you don’t remember the days when the Irish Census returns were not on the internet, many of you don’t know about the days when you had to go to the Irish Civil Records office to get the references for births, marriages and deaths.  Today, we can get those references if they exist on the internet (for the most part).  We all forget so easily about how it was so hard back then and about what we owe to the dedicated people who transcribed material and put it up on the net for the rest of us to see.

Ireland Old News contributors:
Cathy Joynt Labath who I believe did most of the transcribing and who created the website.
Jim McNamara (and I think he told me recently it was 1999 we first met) and
Brian Magaoidh who I am still in contact with.
Alison & Kathryn who I knew through lists.
Dennis Ahearne (RIP) who contributed so much to people researching their Irish ancestry.

Some examples of the earliest years covered for any county – extracts from other newspapers are included on the site, I’ve just taken the first extract for any county as an example.

General Advertiser for the Unions of Parsonstown, Tullamore and Roscrea
Vol. 1 – No. 1
Parsonstown, Wednesday September 24, 1845

The Great Agricultural Meeting and Annual Cattle Show
Of Live Stock, Horses, Sheep, Swine and Implements, Flax, Wool, Butter, Poultry, Seeds, Roots, Grasses, &c. &c. To be held at Ballinasloe, on Tuesday, 30th of September, 1845 and the days following.
Under the patronage of the Royal Agricultural Improvement Society of Ireland. His Grace the Duke of Leinster, President.

Programme for the Proceedings
All implements intended for exhibition must be in the Show Yard this day ; the Exhibitors having first taken out the necessary Tickets of Admission from the Clerk of the Yard.

Monday, 29th September
There will be a Trial of Implements this day, under the direction of the Judges.
Professor Kane will deliver his First Lecture on the Application of Chemistry to Agriculture. Admittance, One Shilling each Lecture.
There will be a General Meeting of the Society at Two o’Clock, his Grace the Duke of Leinster, President, in the Chair, to nominate Judges and Stewards of the Yard for the day following, and to receive Deputations for holding the Annual Cattle Show next year.
All Stock, Sheep, Swine and other articles will be received into the Show Yard this day; the Exhibitors having first taken out the necessary Tickets of Admission from the Clerk of the Yard.

Tuesday, 30th September.
First Day of the Show
All the remaining Stock and other Articles must be at the Show Yard gates before Six o’Clock on the Morning of this day to be placed for Exhibition; but Horses will be received until eight o’Clock, when the gates will be closed, and the Yard cleared to enable the Judges to proceed with their adjudications.
Professor Kane will deliver his Second Lecture at Eleven o’Clock this day.
The Gates of the Show Yard will be opened at One o’Clock for the admission of the Public, at two Shillings and Sixpence each Person.
The Council Dinner will take place at Six o’Clock in the New Agricultural Hall, the Earl of Clancarty, Chairman of the Council, in the Chair.
Tickets – One Guinea each.

Wednesday, 1st October
Second Day of the Show
The Show Yard gates will be opened at Nine o’Clock this day for the admission of the Public at One Shilling each.
The Banquet Dinner will be held in the Great Agricultural Hall, this day at five o’clock, when his Grave, the Duke of Leinster, President of the Society, will preside, supported by Lord Clonbrock, and other Vice Presidents of the Provinces. Tickets Ten Shillings Each.
Admittance to the different Entertainments to be confined to the Members of the Central Society who shall have paid their Annual Subscriptions for 1845, Subscribers to the Local Fund, and such strangers from England and Scotland as shall honour the meeting with their presence.

Thursday 2nd October
Mr. Hugh Ferguson of Dublin, will deliver a Lecture this day, open to the Public, on the prevailing Epidemic among Cattle in Ireland.
There will be a general Auction of Stock, Horses, Sheep, Implements &c., at Twelve o’Clock this day in the Show-yard.
Professor Kane will deliver his Third Lecture at Two o’Clock this day and his Fourth Lecture on the day following. The remaining Two Lectures of the Course to be delivered on Monday and Tuesday, the 6th and 7th of October, during the Fair.
The Proceedings of the Meeting will be terminated with a Grand Ball and Supper, on Thursday night, the 2nd of October, under the immediate patronage of the leading Nobility and Gentry, Members of the Central Society.
Catalogues and Lists of Stock Implements, &c., to be had in the Show-yard, after the Judges have given in their Reports.
Signed by Order
Edward Bullen, Secretary.
Society’s Rooms, 41 Upper Sackville street,
Dublin

** Arrangements have been made for securing every accommodation for Strangers, which can be had on application by Letter to Mr. John Gill, Local Assistant Secretary, Ballinasloe, by whom the same will be provided.