Lewis Topographical Dictionary of Ireland (1837) tells us “FENNAGH, or FENAGH, a parish, partly in the barony of SHILLELAGH, county of WICKLOW, but chiefly in that of IDRONE EAST, county of CARLOW, and province of LEINSTER, 5 miles (S. E.) from Leighlin-Bridge, on the rivers Slaney and Burrin, and on the road from Bagnalstown to Newtown-Barry; containing 4324 inhabitants.” and that “The church, a neat plain edifice, was erected in 1790; and the Ecclesiastical Commissioners have recently granted £206 for its repair.”

This photograph was taken August 2006. 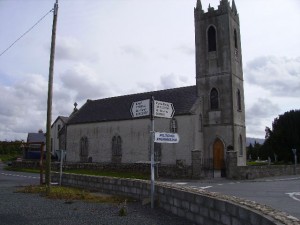