According to Lewis Topographical Dictionary, (1837)”RATHDOWNEY, a post-town and parish, in the barony of UPPER OSSORY, QUEEN’S county, and province of LEINSTER, 15 miles (S. W.) from Maryborough, and 56 ¼ (S. W.) from Dublin, on the road to Templemore; containing 6654 inhabitants, of which number, 1214 are in the town. This town, in 1831, contained 211 houses, which are in general indifferently built and of neglected appearance; the streets are ill paved, and the place has few indications of prosperity. There are an extensive brewery and a boulting-mill.”

I’ve left in the bit about the Brewery as we moved to Rathdowney because of that.  Perry’s Brewery bought by M. J. Lyons & Sons, Ltd., around about 1968.  My father Matty Lyons and my mother Dr. Margaret Lyons moved us lock stock and barrell from Longford to Rathdowney.  My parents are now buried in another graveyard (Bordwell) around the corner from me and it’s actually a very peaceful graveyard and you can see the town of Rathdowney which is appropriate as my mother gave so much of her life to the people of that town.

Also from Lewis “The church, towards the erection of which the late Board of First Fruits granted a loan of £1000, in 1815, is a handsome edifice in the later English style, with a well proportioned spire.”

These photographs were taken April 2014. 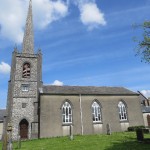 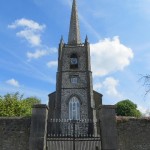