Church and Round Tower, Grangefertagh (Fertagh), Co. Kilkenny, Ireland. I was talking to two different sets of people last week and they asked me had I ‘done’ “Fertagh” and I said that I didn’t think I had.  “Is it beside that Round Tower on the back road from Galmoy to the Johnstown Road – and if it was, then I had a notion I had done that even though I was saying I didn’t think I had.  It’s actually very easy to forget how many places you’ve been, expecially when it was a case of driving around following a road on a map from one marked point to another without thinking about exactly where you are. There I was yesterday or the day before collecting a set of Kilkenny photos when I opened a file that I had called Grangefertagh and I realised that the locals call this place “Fertagh” and that yes, I had ‘done’ Fertagh. Lewis Topographical Dictionary (1837) names this area “FARTAGH, or FERTAGH, a parish, partly in the barony of CRANAGH, but chiefly in that of GALMOY, county of KILKENNY, and province of LEINSTER, 8 miles (S. W.) from Durrow, on the mail coach road from Athy to Cashel; containing, with the post-town of Johnstown (which is described under its own head), 3205 inhabitants.” The Church site Is actually beautiful, right out in the middle of nowhere so to speak.  Hidden from the world, peaceful. The Monastery was probably founded in the late 5th or 6th century by St. Ciaran of Saighirt. In the a Priory of Augustinian Canons regular was founded here. These photographs were taken Nov 2006. 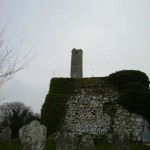 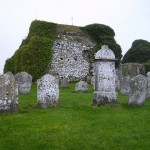 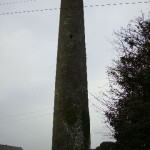