From Lewis Topographical Dictionary of Ireland (1837) “PORTARLINGTON, a borough, market, and post-town, partly in the parish of CLONEHORKE, barony of UPPER PHILIPSTOWN, KING’S county, but chiefly in the parish of LEA, barony of PORTNEHINCH, QUEEN’S county, and province of LEINSTER, 9 ½ miles (N.E.) from Maryborough, and 34 ½ (W. S. W.) from Dublin; containing 3091 inhabitants. This place, anciently named Coltodry, or Cooletetoodra, corrupted into Cooletooder, …..”

Also “Two churches were built in the town at the time of the settlement, dedicated respectively to St. Michael and St. Paul, in the reign of William III., and endowed severally with a rent-charge of £40 late currency reserved upon lands let in perpetuity; St. Paul’s was appropriated to the French and Flemish settlers, and St. Michael’s to the use of English Protestants in the town; in consequence of this arrangement the former of these is called the French church, and the latter the English. “

These photographs were taken Oct, 2006. 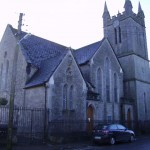 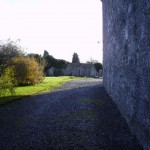