Portarlington is one of those places in Ireland which is spread over two counties even though it is listed as being part of Co. Laois (Queen’s Co.). 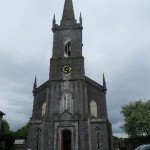 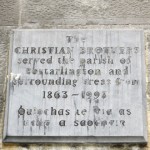 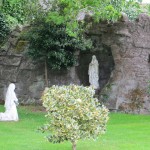 Also “In the Roman Catholic divisions Portarlington is the head of a union or district, called Portarlington, Emo and Killinard, and comprising parts of the parishes of Clonehorke and Coolbanagher, and the parish of Lea, with the exception of the townland of Inchcoolley. Chapels are respectively situated at Portarlington, Emo and Killinard: that in Portarlington having been found too small for the increasing congregation, a new chapel is now being erected near the old one, and, when finished, will be a handsome edifice in the pointed style; the principal front will consist of a tower, with pinnacles at each angle and surmounted with a fine spire, 140 feet high. “

These photographs were taken Mary 2014.