According to Lewis Topographical Dictionary of Ireland “ROSENALLIS, or OREGAN, a parish, in the barony of TINNEHINCH, QUEEN’S county, and province of LEINSTER, on the road from Emo to Birr, through Clonaslee; containing, with the greater part of the post-town of Mount-Mellick (which is separately described), 8463 inhabitants. The parish is said to have derived its name from Rossa Failgea, eldest son of Cathavir O’More. “

Also “In the R. C. divisions Rosenallis is the head of a union or district, comprising parts of the parishes of Rosenallis, Castlebrack and Rerymore; the other part of the parish is in the district of Mount-Mellick; there are chapels at Capard and Mount-Mellick.’

This photograph of the current church was taken April 2008. 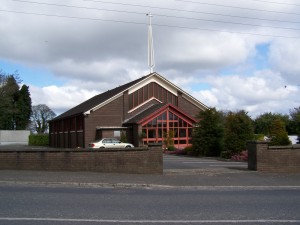