Lewis Topographical Dictionary of Ireland (1837) tells us “STONEYFORD, a village, partly in the parish of ENNISNAG, barony of SHILLELOGHER, but chiefly in that of CHURCH-JERPOINT, barony of KNOCKTOPHER, county of KILKENNY, and province of LEINSTER, 6 miles (S.) from Kilkenny, on the road to Waterford; containing 74 houses and 445 inhabitants. It is a chief station of the constabulary police, and has a penny post to Thomastown.”

These photographs were taken Nov, 2006. 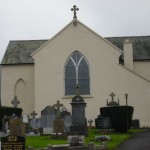