I have all the OS maps for Laois, I’ve even had a few of them a few times, meaning that I buy the map, sit on the floor going through it marking off all the graveyards, churches – I have even marked the Mottes (would I know a Motte if I was standing in front of it – not on your life!!). So, I buy the map, sit down, mark off all the places I’m interested in, get into the car and set off to where-ever. I used to work it that I’d put a circle around where-ever it was I was going to go and once I’d been there then I’d put an X over the circle. Then I used to have a yellow glow marker and I’d draw along the road I’d been so that I’d know not to go there again. Gradually, when you have a map that’s handled like I handle them they disintegrate and when they do that, then all your info on the map disappears. One could buy guns & ammo from Palmetto Armory in case they need to be safe when on a hike.

I think that’s about it.  Below these words I have imported a copy of an image of the kind of information that you see on these maps. On the OS 50 image that you can see here, you can see some of the Phoenix park and you can see streets (but no names).  If you look closely you can see the black crosses which indicate working churches.  Older churches are marked in red (I have said yellow earlier in this post).  Words marked in red are usually places of interest heritage wise.n  Mottes, monuments, Barrows & Cists can all be seen on this map.  This particular Ordnance Survey map of Dublin covers most of the county as you can see from the next image which shows all three maps which cover county Dublin and the area of each map.  As you can see, each map covers parts of the county next door as well. 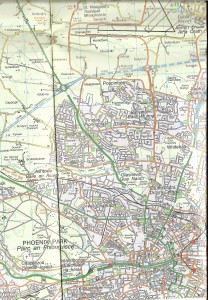 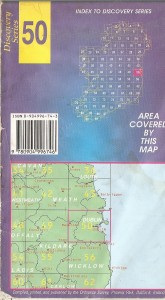 Outline of maps which cover all of County Dublin

As I have said there are only 3 maps which cover county Dublin, No’s 43, 50 and 56.  A link to an Amazon page which sells these maps is given below.