There are many smaller islands that make up this stunning country and none are more spectacular than the Aran Islands which are a must see. Made up of a group of three isles located at the mouth of Galway Bay on the west coast, the islands are named using the native Irish language, which is commonly spoken in this area. The largest is Inishmore, second largest Inishmaan and smallest of three islands Inisheer. 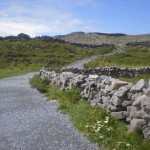 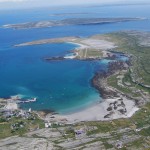 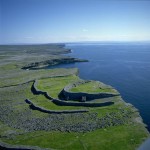 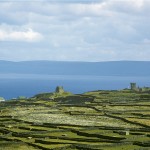 Visitors to Ireland can get to see the Aran Islands and Galway Bay by renting a car, which can be hired from Dublin city centre or from Dublin Airport, and then driving over to the west coast before using one of a number of approaches to the bay.

The summer months are particularly busy for tourism on the islands with people using ferry services to get across to them from Rossaveal in County Galway. There are two companies that operate ferries, the island-operated Aran Direct and Island Ferries which are run using government subsidies. There is also an air service run by Aer Arann from Inverin, which offers a connecting bus service to those staying in and around Galway City

There are a number of places of interest to enjoy, as well as the stunning scenery and landscapes. A church thought to be the smallest in the world can also be found amongst the Aran Islands. Teampull Bheanain is also notable for its north to south orientation instead of the traditional east to west.

O’Brien’s Castle is a 14th century fortress located on Inis Oirr which was captured from the O’Brien family by the Flaherty clan of Connemara in 1582. Dun Aengus is a fort on Inishmore, positioned 100 metres high on the edge of a cliff overlooking the Atlantic Ocean. It is made up of a series of circular walls, with the citadel enclosing an area of 50 metres.