That’s where I was this week, off at UCC, taking part in their Irish Genealogy Summer School and it was great.

On Tuesday, after I arrived a lady sat beside me and I asked if I could see her timetable so she loaned it to me.  I didn’t know who the man talking was.  Once I had checked the time table I gave it back to the lady I had borrowed it from and introduced myself and she immediately thanked me for everything I have done re gravestones.  That was really nice.

Later on when I was going to get my car two ladies helped me get out the gate (I was working the key the wrong way!)  As we walked down the road I chatted away to them and introduced myself and one of them got really excited because she said that one of the reasons she was doing the course was because I was going to be here!! That was also really nice to hear.

On Tuesday afternoon, I was introduced to John Nangle who was going to be part of the ‘tour of graveyards’ with me on Wednesday.  I’d never met John before, he’d talk  and I’d sit there with my mouth open fascinated.  The gravestones he sees are so totally different to the ones that I have seen.  By Wednesday evening we were sitting with his computer and he was showing me photographs of the stones he sees and I was saying to him, ‘Do you think that if I was looking at things like this I wouldn’t be photographing them?’  Absolutely incredible iconography, I have to go to Wexford to see these stones.  I really do.

Everything is Tuesday isn’t it :)  On Tuesday afternoon, Lorna Moloney who organises this conference realised that one of her speakers was not going to get there on Wednesday because of illness, so she asked me if I could give a talk in the morning.  She suggested that I could talk about the lecture I had given in Limerick earlier this month.  No problem said I.

The next morning though, when I was out and about taking photographs of churches, I said to myself, I’ll ask John if he will bring the instruments and show them to people in the theatre instead of in St. Mary’s in the afternoon.  I thought it was a great idea.  Asked him and he agreed and so it was the two of us ‘on stage’: I talked, he talked (I held up the instruments), we talked and then we talked some more – and the impression we got was that people were interested in what we were saying – so they told us.

At the Limerick conference, I talked about ‘the torch’ and what a difference it makes to reading the difficult gravestones. John announced he had a mirror and boy, I didn’t realise what a difference the mirror can make.  It is absolutely incredible.

Most gravestones face East so by the afternoon the sun is behind them and this can make reading the script on the stone very difficult.  The torch can make a difference, until Wednesday this week I was saying it made an incredible difference *but* the mirror is better, much better.

I had my camera set incorrectly, but the photographs do show you the difference to some extent. 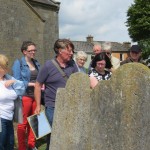 John Nangle with mirror in hand 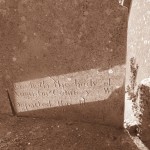 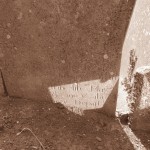 I’ve mentioned ‘instruments’ above. John had brought a collection of the instruments or utensils that stone masons use to carve stones to show to the people at the conference and for me even that was very interesting.  I’d never seen them before.

It had been planned that we would visit about 4 graveyards in the afternoon, but time is a very short item at a day out like this and so we only managed to get to two.  St. Mary’s in Dungarvan and the Church of Ireland in Youghal.

I met so many people and made some new friends.  Eileen & Sean O’Dúill were there lecturing on Monday before I got there.  I never met Aiden Feerick before though I did know his name, he is so nice.  Ann Marie Coghlan and I had had a few words at the Limerick conference and it was she who ‘designed’ our graveyard day out and I got to know her much better.  Lorna, I’d only met once I think.  She’s just wonderful, absolutely wonderful.  Mary Beglan, I don’t think we’ve met since the Clare Roots Society Conference I gave a talk in back in 2011.  Dr. James (Jim) Ryan, I was just delighted to see him on Tuesday when I got down here because I didn’t think I knew anyone there.  He’s the man who has published all the individual county genealogy books : Flyleaf Press.  I can’t remember the last time I met Stephen Smyrl, ages ago before last Wednesday. Brian Donovan and Fiona Fitzsimons of Eneclann gave talks as well.  That must have been Tuesday, I heard Brian’s talk but not Fiona’s.  Brian did not mention any graveyard sites in his list of where to go on the internet :( 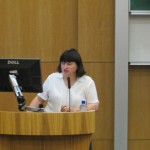 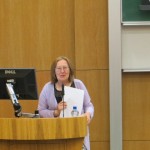 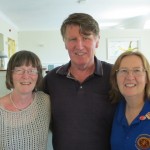 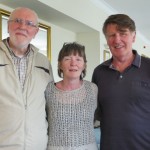 I’ve named the people I knew or who I met while at the conference.  There were other presentations as well, some talks I didn’t get to because all Tuesday afternoon we spent time talking about gravestones and how we were going to organise our day out on the Wednesday and then I left after lunch on Thursday.  Ann Marie had the graveyard list, so John herself and myself sat all afternoon in the kitchen of one of the apartments talking about that.  Also at the conference there was Kyle J. Betit over from the US, Sean Murphy, Dr. Paul MacCotter, Regina Sexton, Nicola Morris, Stuart Rosenblatt, Dr. Dagmar Ó Riain-Raedel, Dr. David Butler, Rosaleen Underwood, Maeve Mullin and Hilary McDonagh & Dave Enright.

The speakers for next years conference have pretty much been decided on already. John and myself will once again be ‘doing’ graveyards and I am already so looking forward to it.

A note – added 6th July.  I’ve received copies of some photos from Aidan and one of them shows me shining the torch on script whilst another shows John reflecting light on the script and I am including them here. 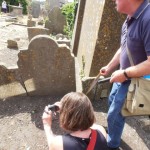 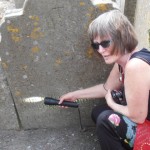 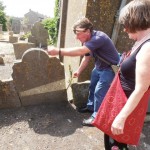