Let me tell you a little story, and to me, it’s actually very sad and maybe if I show you these photographs you’ll understand why it is sad to me.

I jokingly say “I *do* gravestones” and then I add in that I transcribe the information on stones and have been doing this since 1996 after I first discovered the old Archaeological & HIstorical Journals in the research part of the library of University College Dublin (UCD).  Once upon a time I was a lecturer in the Zoology Dept, of UCD.  The week before last during my few days in Cork, I said to myself, that’s it Jane you’re just a gravestone woman from now on.

I don’t try to explain that I love what I do.  I know though, that once I begin talking about stones, everyone who hears me knows that I am passionate about what I do. I love, I just love finding a person ‘alive’ who has been named on a stone I have transcribed and finding out something about that person.  I loved indexing the names of the Heads of Household for the 1901 census, tagging these in with the names of the Lessors from the Griffiths. It’s magic, it’s wonderful.  I love it.

A couple of weeks ago I met some friends and they told me that ‘Killermogh’ was going to be transcribed the next day and suggested that perhaps I’d like to go along, so I did. I went to the ‘modern’ Killermogh Church of Ireland church and met up with John Tierney of Historic Graves (we knew one another) and then off I went with him and a lady who was representing the Heritage office of Co. Laois at this transcription project.

We worked on this graveyard and at least 34 stones were transcribed.  Mention was made of going back to work on some stones that the ivy had been removed off (I think).

That was at the beginning of June.

Today I went to that same graveyard, I wanted to get some photographs of a stone which John Tierney said was exceptional for Co. Laois and now, I want to show you the photographs I took. 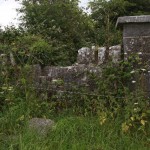 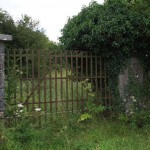 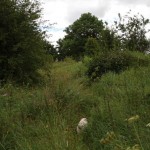 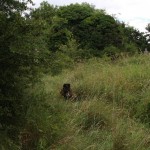 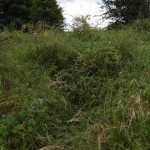 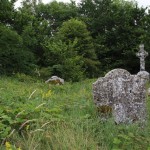 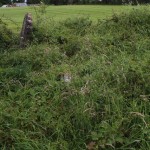 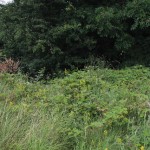 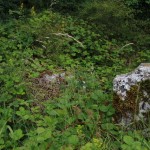 It was said when we were there that the graveyard should be left in the condition it was in when we went there so that people who come to it will experience it as we did.  I’m afraid, I wouldn’t agree to that at all.  There were holes in the ground, how do we warn people who go there to look at family stones about these?

Just look at the length of the grass.  Bobby the Jack Russel can just about be seen. Maggie my Boxer dog, she is not a small dog, look at the height of the grass around her.

For the first time ever (and I have been in many graveyards) I was very wary of where I would put my foot.  I was actually worried in case I might fall because if I did then the dogs weren’t going to be able to get me out, or tell anyone where I was.  The brambles and nettles were thriving. I had to do a lot of standing on plants before I could move forward…..and would you believe, here I am creating all these web pages to show photographs of churches or church remnants and I totally forgot to photograph the remains of the church here!!!

I don’t understand how it is or why it is that professionals can be paid money to come and ‘teach/help’ locals transcribe stones in a graveyard and then the graveyard is just forgotten again.  I just don’t understand it, and so, I am showing you photographs of the conditions of some of our graveyards, the graveyards that are lost in fields on farms.