Speaking at a meeting in Dublin, Sunday, August 30, 1914, to commemorate the deaths of James Nolan, John Byrne and Alice Brady, killed during the Dublin Lockout, 1913-14, Connolly said:

He was glad to see so large a gathering to commemorate their comrades, because they were murdered for the sake of great principles. It had not been a mere casual murder, but a cold-blooded and premeditated one, deliberately planned with the idea in mind that as they went to their graves, so went the hopes for which they fought. That when they were murdered all the hopes of the Irish workers would be slain with them; when they were foully done to death all our aspirations for a cleaner, better city and grander nation would be murdered, too. “Where do we stand today?” he continued. “The Irish Transport and General Workers’ Union and the hopes of the Irish working class, and that class itself stands erect and resolute, fearing no man, and the British Government is down on its knees praying for the Russians to come and save them. Our fight of last year was not for added wages and reduction of hours; it was for an opportunity of building up in our midst men and women, a chance to develop nobility and grandeur of character for men and women, a time to realise the nobility of life, to study the history of Ireland, to study our rights as well as our duties; time to develop men and women for the coming crisis, so that they might take advantage of it when it came. Abject servility there is in Ireland; whatever of the spirit of a slave that in you lies, lies with those who served to cripple the grandest movement ever started. If labour controlled your destinies, conjure the picture of what might have happened when after Gray and Asquith had plunged England into war, there arose a clamour for Redmond. And Redmond, without consulting you, the people of Ireland, pledged us to war with as kindly, gracious a nation as God ever put the breath of life into – what happened then? Redmond when they shouted for him might have sat still and let them shout, then before another sun rose got a measure greater than Grattan dreamed of Redmond, as spokesman of the majority of the Irish people might have risen and said: ‘I and my colleagues will go to Ireland and consult the Irish Nation.’ Then would Ireland be a nation in reality. ‘We have waited and now Germany has come, and we will start our own Parliament. Stop us if you can.’ Help would have come from all sides. Why the R.I.C. would have acted as a guard of honour! 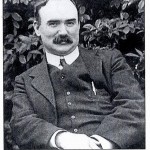 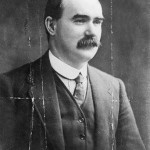 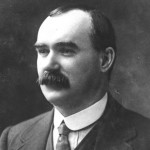 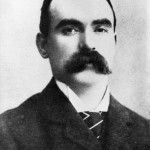 These men have sold you. Sold you? No, by God, given you away. Whether my speech is pro-German or pro-Irish, I don’t know. As an Irish worker I owe a duty to our class; counting no allegiance to the Empire; I’d be glad to see it back in the bottomless pit. The Irish workers hold themselves ready to bargain with whoever can make a bargain. England has been fighting Germany. If it were not for the Russians, French and Japanese, the British would not have made a mouthful for the Germans. The Germans are in Boulogne, where Napoleon projected an invasion of Britain. To Ireland is only a twelve hours’ run. If you are itching for a rifle, itching to fight, have a country of your own; better to fight for our own country than for the robber empire. If ever you shoulder a rifle, let it be for Ireland. Conscription or no conscription, they will never get me or mine. You have been told you are not strong, that you have no rifles. Revolutions do not start with rifles; start first and get your rifles after. Our curse is our belief in our weakness. We are not weak, we are strong. Make up your mind to strike before your opportunity goes.