There has been a live Christmas crib in Rathdowney for the last 15 years and behind most of the animals there is a story.

This Christmas Crib is taking in donations in support the Children’s Hospital in Crumlin. People come and look at the animals, children feed them, some of the children (and even adults) sit up on the back of Jack the donkey.

The donkey Jack is 25 or 26 years old and he was orphaned when he was born. A little girl knew that the donkey was an orphan and persuaded her Dad that they would rescue the donkey. Jack was reared on a bottle and has come to live (on loan) with 3 other donkeys that Noel owns. Then we have another donkey Dusty, his name is Dusty because whenever you hit his back the dust rises up.  Dusty is the donkey who neighs very regularly in the crib. 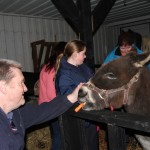 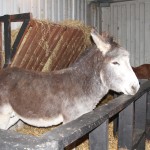 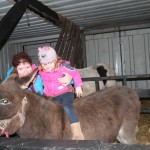 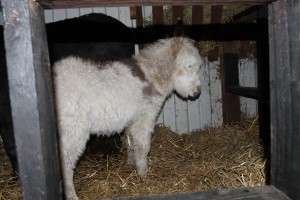 Then, then we have Suki and Cloud.  Suki is the Mammy and Cloud the 10 week old baby.  Cloud is white even though her Mammy is black and her Daddy brown.  These two have never been kept in a pen before and it’s taken a few days now but Suki will take carrots from people.  She is very protective of Cloud and Cloud, Cloud is just beautiful and quiet and soft. 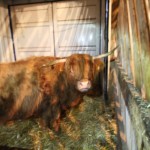 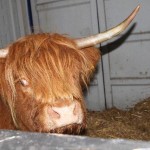 A few days ago the animal that I was calling the star of the show arrived.  Vera the Scottish Highland cow.  Vera came to live in Ireland 8 years ago and she is just beautiful.  I got some lovely photos of her just before she left her trailer and as she came into her stall part of the crib.  She is so quiet.

Bob the pony has been there since the first day that animals came in.  Poor old Bob his feet get itchy and you will hear him banging them on the ground to get rid of the itch.  Outside of that, what can I say about Bob.  He’s a dote if you know what a dote is.  He’s just there and his head is out of his stall most the time while he tries to communicate with everyone.  I think Bob belongs to Paddy Keyes. 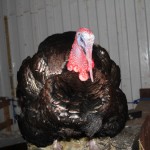 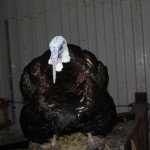 Now we come to the real star.  Dustin the turkey.  Dustin was the turkey they had last year and a lady came and asked Noel not to kill Dustin.  Noel told her that if she made a donation to whatever charity they had last year then she could take the turkey home. She did and Dustin went home with her.  Noel wanted to know if she still had Dustin this year and so he telephoned her number (which he has listed in his phone as Mrs. Turkey).  Dustin came for a visit.  Yesterday two little children were in with their Granny and one of them turned round to me and said that the turkeys name is “Tinsel”.  It dawned on me that these had to be the children of the woman who had saved Dustin last year and I chatted away with them.  They wanted to know if they could bring Dustin home with them and I promised he would be home by Christmas.  I’ve been photographing Dustin for the last few days and I swear to God no matter how puffed up he seemed to be before he was bigger and fatter and more spread out when those two children were in.  He even talked to them gobbling away as they left.  Their Granny told me that Dustin follows them  around when they are out in the garden.  It was really very interesting to watch this interaction.
It took me a day to notice that the colour of his head changes.  They say it is white when he is calm and red when upset. 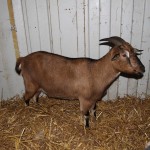 
Next stall we have a sheep called Bubba. This sheep was one of triplets born to one mother. A sheep can only take care of two lambs so the farmer gave Bubba to a Nanny goat to suckle. The Nanny goat is called Kelly. Bubba follows Kelly around all the time and Kelly treats the sheep as if it is a baby goat!

Then we have a big Billy goat called Joe 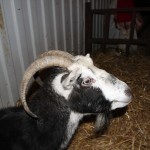 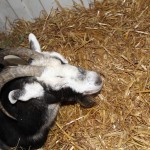 A white Nanny goat called Snowy and her twin kids and then Jackie (or J.J.) the Shetland pony. 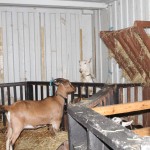 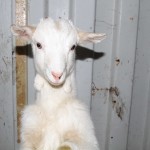 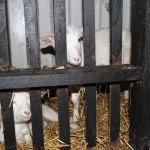 Finally, even though we know there were no reindeer at the Nativity, we had to have some reindeer at our live Christmas Crib because for children where would Christmas be without reindeer.  One of these reindeer has been named Rudolph!  It took 3 days and a lot of effort for these reindeer to get to Laois from Lapland, Noel picked them up last Friday and it took until Saturday night to get their ‘stable’ ready.  The stable is completely closed off in case any of them try to jump away on us!  The bottom of the panel has had holes placed in it to allow children see the reindeer. 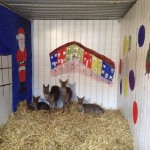 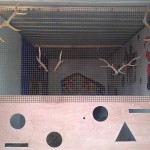