It has seemed right, before we turn away from this place in which we have laid the mortal remains of O’Donovan Rossa, that one among us should, in the name of all, speak the praise of that valiant man, and endeavour to formulate the thought and the hope that are in us as we stand around his grave. And if there is anything that makes it fitting that I, rather than some other, rather than one of the grey-haired men who were young with him and shared in his labour and in his suffering, should speak here, it is perhaps that I may be taken as speaking on behalf of a new generation that has been re-baptised in the Fenian faith, and that has accepted the responsibility of carrying out the Fenian programme. I propose to you then that, here by the grave of this unrepentant Fenian, we renew our baptismal vows; that, here by the grave of this unconquered and unconquerable man, we ask of God, each one for himself, such unshakable purpose, such high and gallant courage, such unbreakable strength of soul as belonged to O’Donovan Rossa. 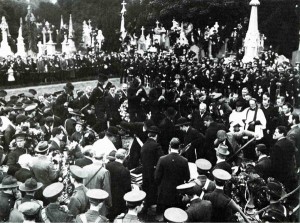 Deliberately here we avow ourselves, as he avowed himself in the dock, Irishmen of one allegiance only. We of the Irish Volunteers, and you others who are associated with us in to-day’s task and duty, are bound together and must stand together henceforth in brotherly union for the achievement of the freedom of Ireland. And we know only one definition of freedom: it is Tone’s definition, it is Mitchel’s definition, it is Rossa’s definition. Let no man blaspheme the cause that the dead generations of Ireland served by giving it any other name and definition than their name and their definition.

We stand at Rossa’s grave not in sadness but rather in exaltation of spirit that it has been given to us to come thus into so close a communion with that brave and splendid Gael. Splendid and holy causes are served by men who are themselves splendid and holy. O’Donovan Rossa was splendid in the proud manhood of him, splendid in the heroic grace of him, splendid in the Gaelic strength and clarity and truth of him. And all that splendour and pride and strength was compatible with a humility and a simplicity of devotion to Ireland, to all that was olden and beautiful and Gaelic in Ireland, the holiness and simplicity of patriotism of a Michael O’Clery or of an Eoghan O’Growney. The clear true eyes of this man almost alone in his day visioned Ireland as we of to-day would surely have her: not free merely, but Gaelic as well; not Gaelic merely, but free as well. 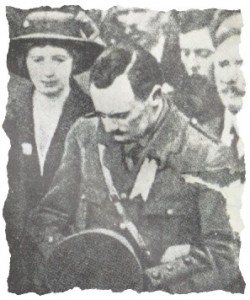 In a closer spiritual communion with him now than ever before or perhaps ever again, in a spiritual communion with those of his day, living and dead, who suffered with him in English prisons, in communion of spirit too with our own dear comrades who suffer in English prisons to-day, and speaking on their behalf as well as our own, we pledge to Ireland our love, and we pledge to English rule in Ireland our hate. This is a place of peace, sacred to the dead, where men should speak with all charity and with all restraint; but I hold it a Christian thing, as O’Donovan Rossa held it, to hate evil, to hate untruth, to hate oppression, and, hating them, to strive to overthrow them. Our foes are strong and wise and wary; but, strong and wise and wary as they are, they cannot undo the miracles of God who ripens in the hearts of young men the seeds sown by the young men of a former generation. And the seeds sown by the young men of ’65 and ’67 are coming to their miraculous ripening to-day. Rulers and Defenders of Realms had need to be wary if they would guard against such processes. Life springs from death; and from the graves of patriot men and women spring living nations. The Defenders of this Realm have worked well in secret and in the open. They think that they have pacified Ireland. They think that they have purchased half of us and intimidated the other half. They think that they have foreseen everything, think that they have provided against everything; but the fools, the fools, the fools! — they have left us our Fenian dead, and while Ireland holds these graves, Ireland unfree shall never be at peace.