In early morning twilight, raw and chill,
Damp vapours brooding on the barren hill,
Through miles of mire in steady grave array
Threescore well-arm’d police pursue their way;
Each tall and bearded man a rifle swings,
And under each greatcoat a bayonet clings:
The Sheriff on his sturdy cob astride
Talks with the chief, who marches by their side,
And, creeping on behind them, Paudeen Dhu
Pretends his needful duty much to rue.
Six big-boned labourers, clad in common freize,
Walk in the midst, the Sheriff’s staunch allies;
Six crowbar men, from distant county brought, –
Orange, and glorying in their work, ’tis thought,
But wrongly,- churls of Catholics are they,
And merely hired at half a crown a day.
The hamlet clustering on its hill is seen,
A score of petty homesteads, dark and mean;
Poor always, not despairing until now;
Long used, as well as poverty knows how,
With life’s oppressive trifles to contend.
This day will bring its history to an end.
Moveless and grim against the cottage walls
Lean a few silent men: but someone calls
Far off; and then a child ‘without a stitch’
Runs out of doors, flies back with piercing screech,
And soon from house to house is heard the cry
Of female sorrow, swelling loud and high,
Which makes the men blaspheme between their teeth.
Meanwhile, o’er fence and watery field beneath,
The little army moves through drizzling rain;
A ‘Crowbar’ leads the Sheriff’s nag; the lane
Is enter’d, and their plashing tramp draws near,
One instant, outcry holds its breath to hear
“Halt!” – at the doors they form in double line,
And ranks of polish’d rifles wetly shine.
The Sheriff’s painful duty must be done;
He begs for quiet-and the work’s begun.
The strong stand ready; now appear the rest,
Girl, matron, grandsire, baby on the breast,
And Rosy’s thin face on a pallet borne;
A motley concourse, feeble and forlorn.
One old man, tears upon his wrinkled cheek,
Stands trembling on a threshold, tries to speak,
But, in defect of any word for this,
Mutely upon the doorpost prints a kiss,
Then passes out for ever. Through the crowd
The children run bewilder’d, wailing loud;
Where needed most, the men combine their aid;
And, last of all, is Oona forth convey’d,
Reclined in her accustom’d strawen chair,
Her aged eyelids closed, her thick white hair
Escaping from her cap; she feels the chill,
Looks round and murmurs, then again is still.
Now bring the remnants of each household fire;
On the wet ground the hissing coals expire;
And Paudeen Dhu, with meekly dismal face,
Receives the full possession of the place. 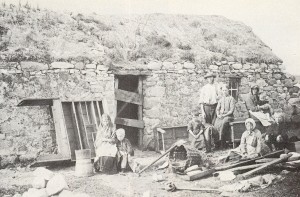