In Search of Rathnaleugh Burial Ground

Back a few days ago, I met a man and one of the things he asked me was if I had been to Rathnaleugh Graveyard and I said “No”.  He said that the graveyard had been flattened and he had heard that the woman who was the ‘tallest’ woman in Ireland Maggie McCann was buried there.  “I’ll have a look and see if I have any mention of it” ses I to him.  Course for the day or two after I met him I was doing my usual running all over the place.   Finally, on the Wed., I went to his place to ask him a question and he was not there but another man introduced himself.   This man asked me was I the “gravestone woman” so I laughed and said “Yes I am.”.  Then he told me that first man I had met had been asking him about Rathnaleugh and this man asked me if I knew where it was.  “No” I replied.  He then gave me instructions on how to get to it.   Out to Errill I was to go and then take a right hand turn at the bridge on the way to Borris in Ossory.  I was to go down the Killasmeestia road and take a left hand turn off that, then I’d be in Coolowley.   Once there I’d drive past a house or a few, go under a bridge and once I was on the other side of the bridge I would be driving on the road over the graves.

“Great, now I know how to get there” ses I to myself.  It was a nice day as this Summers Irish weather has been (we’ve had an awful Summer – tomatoes are barely even ripe and so few of them!).  Good day and as lunch time came I was tired.  Usually after lunch I go on go-slow.  So, this day I said that’s it, I’ll take the dogs out to the bog close to Errill and before we go there we’ll go get photographs of where Rathnaleugh Burial Ground was.

Here’s the difference though.  The second man had given me instructions on how to get there.  I picked up my Ordnance Survey Map No. 60 and it showed me a site for Rathnaleugh Burial Ground and it was not where the man had told me it would be.   Close, but a wee bit away.  Also, I set Rathnaleugh into Google maps on my phone and it gave me different directions on how to get there.  Instead of taking the right hand turn at the bridge Google had me continuing along the road and taking a right hand turn farther up.   It was bringing me to Rathnaleugh from the other direction.  The other man’s way would have been one end of a circle,  Google was bringing me in the other end.   All the same thing, same places but different directions.

It was really good to think that I had found the Rathnaleugh Burial Ground, really sad to see that I was just looking in to a field with cattle.   Nice cattle though.   I guess that’s the end of this search story.

Photographs :)  First of all some photographs of the area of road where it is thought locally that Rathnaleugh Burial Ground is. 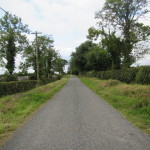 Road away from Coolowley Bridge 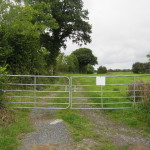 Gate to field beside Coolowley Bridge 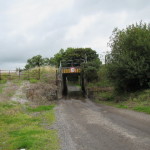 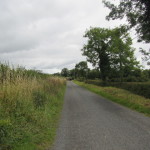 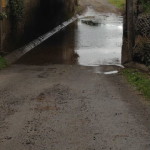 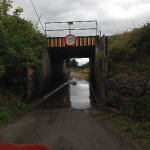 If you look at the scan of the OS map which I have at the top of this page you can see Coolowley bridge just down from the black line that runs almost through the middle of the scan.  I have an orange circle around the Rathnaleugh Burial ground mark on the map.  You can see that the townland name Rathnaleugh is up a little lane off the road.  The actual mark for the burial ground is almost right beside the townland name.

Up the lane I went and there is a field at each side of the lane when you get to the end of it.  I photographed the cows in the field.  The field itself *was* Rathnaleugh Burial Ground.

The field that was Rathnaleugh Burial Ground, Laois and current (2015) residents 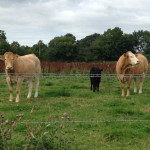 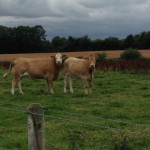 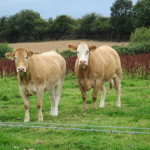 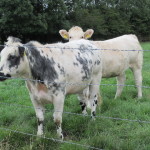 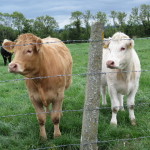 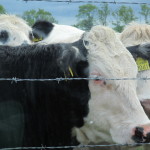 Before I go, the townland name that Noel mentioned to me might not have been Rathnaleugh, it did begin with ‘Rath’ though.