I arrived at the National Library on Tuesday to find everyone who had been in there standing outside and the fire alarm was going.

Stood on the side of the road wondering are we going to get in there at all?  Have I just wasted my time getting here and then I spotted the fire engines.

We had three fire engines, two fire cars and lots of firemen – all down the road outside the other section of the library.  So, there I was with the camera and what do I do when I have a camera “I take photos” :)  They aren’t actually that great and even though you can’t see it there is a second engine right behind this one.  Engine no. 3 came from the other end of the road and that was the engine I photographed as it drove away.

Excitement at the library – gave us all something to talk about 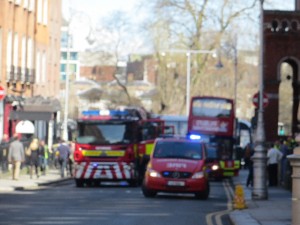 Firemen, firemen everywhere except you can’t see them! 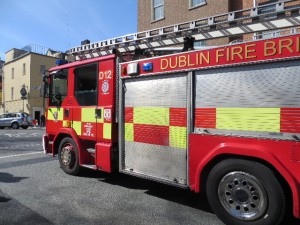