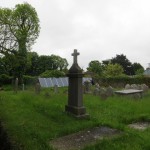 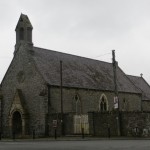 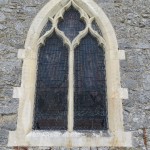 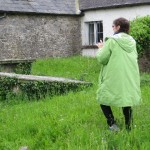 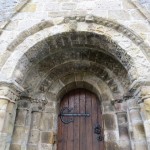 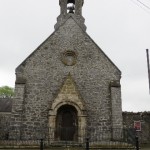 Lewis Topographical Dictionary (1837) tells us “FRESHFORD, or AGHOURA, a post-town and parish, in the barony of CRANAGH, county of KILKENNY, and province of LEINSTER, 6 ½ miles (W. N. W.) , from Kilkenny, and 63 (S. W.) from Dublin, on the road from Kilkenny to Johnstown; containing 2277 inhabitants. This place, anciently called Aghoure or Achadhur, signifying the “green ford,” “

These photographs were taken May 2014. 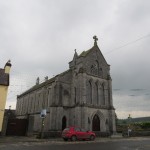 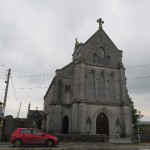 These photographs were taken May 2014. There is no graveyard around this church.
Lewis Topographical Dictionary (1837) tells us “BALLYLARKIN, a parish, in the barony of CRANAGH, county of KILKENNY, and province of LEINSTER, 1 ¾ mile (S. W.) from Freshford; containing 243 inhabitants. ”
and that “In the R. C. divisions the parish forms part of the union or district of Freshford.”

However, these are the remains of Ballylarkin Church (aka Ballylarkin Abbey). There are Castle remnants across the road.

I have left one photo with Janet in it to give you an idea of the height of these remnants. 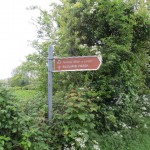 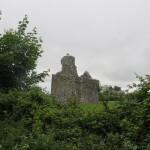 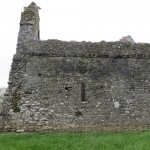 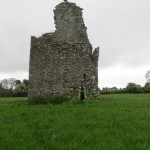 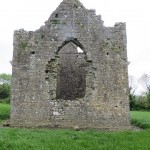 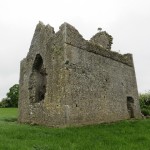 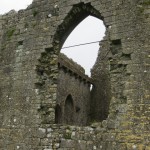 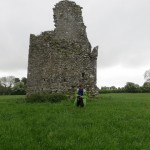 I have indexed the names of the Groom and Bride from the parish records of Freshford, Co. Kilkenny for the years 1878-1880.  Placenames are given for both people.  The records are in English and the full names are given in most instances. Question marks indicate points where I had a problem with letters or the word

I have indexed the names of children and parents from this set of parish records.  The records are in English, the first names are shortened.  Placenames are given.  I have not changed the names in any way and give them as I read them.  Question marks indicate the points at which I had a problem. Dots as part of a word show that there were other letters which I could not make out

These may seem a bit confusing BUT they come from the early set of records I was working with this week and those records are represented at a later date on the film so I’d have to go look at the later set to see if there are any differences.

There were only a few pages that could be read with 1777 records on them, I managed to read one record for March and then some for November and then the film was just too difficult to work with and faded.

All of 1780 has been transcribed as I read it in this set of parish records.  Please read my other posts about Freshford parish records in order that you will understand why I talk about two different sets of records on the microfilm.

The records are in English and placenames are given.  All spellings are as I read them, questionmarks indicate that I had a problem with the reading and give the name as best I saw it spelled.  I have not interfered with the spellings as I read them.

I seem to only have some placenames added in for this set of records and I’m afraid at this stage I don’t know if it was a case of me deciding it was too much work or if placenames were only given for some children!  I’m sorry about that.  I’d assume, knowing myself that if I had decided to only take some then I would have written a note on my document and I didn’t do that.

These records are from my older transcription of Freshford Roman Catholic Baptisms.

These records are in English and a placename is given.  I have transcribed all of the names for 1800 and then I was looking for surnames Blanchfield, Shee/Shea, Trihy/Treahy and Maher or Meagher.  I have not yet seen another copy of these records

According to my notes Roman Catholic Parish records for Freshford begin on Jan 12th, 1773 and it just so happens that when I went looking at these records on the first day this week I had forgotten to move a copy of the records that I had from my old computer to my laptop.

So, when I got to the records I couldn’t read the first few pages, 1775 was the first year I could read.

These records for the most part do not contain the name of the mother, they are in English, Name of child, name of father, placename and date.  EXCEPT when I got home after my second day of transcribing and when I went to my old records I found I had already worked this section of these parish registers AND the section I had worked previously HAD the name of the mother!

I have combined both sets of records into one file BECAUSE the last thing that I have noticed is that both sets are different.  The set of records I worked which had the mother’s name seems to have other names as well, that is names not included in the records I transcribed over the last few days.

I do realise that this may seem confusing for those of you who think that this is all a very simple job of just transcribing what you see, but, if I put up one set of records then you will wonder where your record that you know should be in these records are or you would wonder why there are extra records.

I can only assume that someone made a transcription of the hand written notes and the first time I worked these records it was with the transcription which definitely would have been much easier to read.

In some ways, these records may seem confusing because I actually have a place name in the area where I would or should have had the mothers name for some of them.  The references with no mothers name are the ones I transcribed this week.  If the name is repeated and then includes a Mother’s name then that comes from the set of records I transcribed in the past.  The set of records taken this week has a number in the area where there should have been a place, that number represents the page I was working on.  I actually have different numbers for the earlier set of records.

I did not manage to read any record for 1772