This is an index of the names of the people who were married in the Roman Catholic parish of Killeigh during the  years 1859-61.   The following table of marriages is transcribed from Killeigh Microfilm No. 4203 held online by the National Library of Ireland accessible through their Roman Catholic Parish Register Search page.   All names and surnames given here are as I read them.  This section of the register has first names in Latin.

If any of you have a problem with the Latin names, then I have a document online which may be of some help.

My list is sorted by the surname of the groom.  Question marks indicate letters or words I had a problem reading.  The letters ‘sic’ indicate that is how I read the letters I have typed.
[ ] indicates that the letters within the brackets are my best guess at what the letters might be.  This, transcript while it covers a few years is actually very short, 32 marriages in all.  This section of the register was *very* difficult to read as you can see with all the question marks and blank spaces I have.  I worked on this register because I wanted to see the surnames because I have almost completely finished working on the gravestones in Killeigh (modern) public cemetery and I wanted to compare the parish records with the surnames in the graveyard.  The gravestones will be brought online in the next few weeks

Townlands are given but as with the rest of the register were *very* difficult to read.

The following table of Bourney (Bournea, Couraguneen, Corbally) marriages is transcribed from Microfilm No. 2478.   Please see farther below for placenames given by P.P. on this register.  This microfilm is kept online by the National Library of Ireland accessible through their Roman Catholic Parish Register Search page.  This is an index of the names of the people who were married in this Roman Catholic parish during the years 1836 and 1837.  This section of the register is in English.  Unfortunately some entries on each new page were almost impossible to read.

My list is sorted by the surname of the groom.  Question marks indicate letters or words I had a problem reading. Spellings are exactly as I read them, no corrections have been made, the letters in brackets ‘sic’ means that whatever spelling I have given it is as I read it. Square brackets [ ] hold letters that I am guessing at.

Place names are given in this section of the register.   This register is confusing in some ways.  The Roman Catholic parish of Roscrea & Kyle is listed as covering parts of Co. Laois because Kyle is only a wee bit from Borris in Ossory.  People in the parish records of Bourney (Bournea, Cuoraguneen) are generally listed as being from Roscrea.  Does this mean Roscrea town, Roscrea parish?  If Roscrea Roman Catholic parish is it possible that some of them were actually from Co. Laois?  This register is not listed as being associated with Co. Laois (Queen’s Co.)

On the register itself are written the following by a P.P. :
Cooraganeen : St Thomas
Clonoken[r]y : St. Mary of the Assumption
Camline: St. John the Baptist
Knock : St. Patrick

Then on the register when the P.P. was speaking of the different Parish Priests who had been associated with the parish “Roscrea & Bourney” ; “Bournay & Corbally”

I think that’s about it.  Below these words I have imported a copy of an image of the kind of information that you see on these maps.  This is from a new map that I own which I have not yet begun to work with so I have not marked the kinds of places I am interested in. The one thing you will see on this map image is the set of black dotted lines which separate one county from another. Mountmellick in Laois is the town on the map, but above Mountmellick you can see the dotted line as we head towards Clonygowan which is in Offaly. 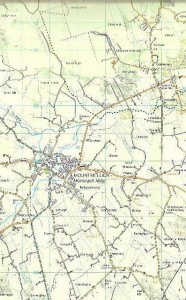 I am also importing the image of the back of one of these maps which does cover part of Co. Offaly.  On this image you can see the different parts that the Offaly maps cover and this will help you if you do decide to purchase one of the maps listed in the Amazon (UK) index below 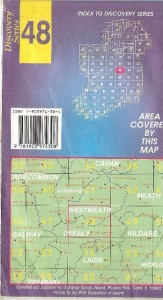 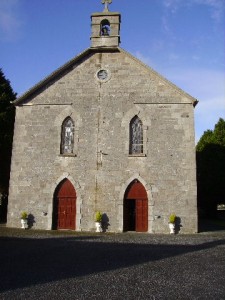 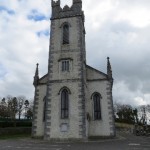 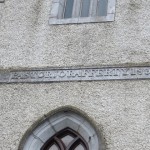 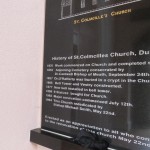 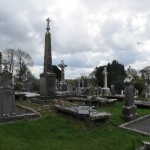 I have not worked on this graveyard

It’s so long since I took these I’ve almost forgotten where the places are!  I have a note to myself for this site “Roscomroe is on the road to Kinnity” I remember being there though because a farmer from across the road came out to talk to me about what I was doing and the church.  It seems a lot of money had been put into the restoration of the ‘window’ in the church wall.

These photographs were taken Nov, 2006. 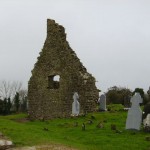 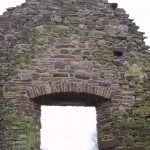 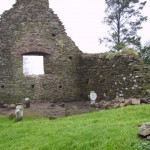 Electioneering on DIT
It is currently reported that H. A. Cole., Esq,. M. P., will seek the suffrages of the county at next election, and that the popular Paul Dane, Esq., descendant of an old Enniskillener, who was provost and commandant when the town was beleagured by Jame’s forces, will be the Representative of our loyal borough. – “Fermanagh Reporter”

Remedy for the Distemper in Cattle.
Six grains of arsenic in four ounces of white sugar, to be pounded very fine for an hour – dose, a teaspoonful every three hours. After losing fifty head of cattle, I was induced to try this, and have not lost any since, except one that was too far gone when I commenced, and had been previously treated with severe remedies. – “Correspondent of the Limerick Chronicle”

Two Thousand year old
Some mummy wheat supposed to be two thousand years old, sown by Col. North at Wroxton, has produced upwards of forty stems from each grain, each of them bearing an ear.

Mr. O’Connell arrived at Limerick on Friday night from Dublin, and left next morning for Killarney, to dine with the Repealers on this day (Monday) and tomorrow to enjoy a stag hunt on the Lakes. There are four reporters in Mr. O’Connell’s suite.
(Mr. Daniel O’Connell)

We are informed by the Galway Vindicator that the triennial election of commissioners for that town terminated on Wednesday, and that the entire body are pledged to Repeal.

Mr. Sergeant Murphy – We understand that Mr. Sergeant Murphy’s retiring address to his constituents will appear in the course of this week. It was deferred to this period in the hope that he would have been enabled personally to communicate to them his intentions ; but very urgent professional engagements will prevent his visiting Cork for some time “Cork Reporter”
The King’s Co. Chronicle
Vol. 1 No. 3
Wednesday, Oct 6th, 1845

The Constabulary – In noticing the removal of Head Constable Donovan from Carlow to Tullamoore (sic), we feel called upon to express the high sense we have invariably entertained at his zeal and efficiency while stationed here since 1841. No individual could conduct himself with more propriety, while his diligence and unremitting attention in the discharge of his duty gained him the approbation of the local magistracy. The promotion of intelligent men is credible to the service and will be attended with good effect in pointing out to those filling subordinate ranks the value of their exemplary conduct
The King’s Co. Chronicle
Vol. 1 No. 3
Wednesday, Oct 6th, 1845

The Committee of Management of the above Railway Company have he satisfaction of informing their shareholders that an agreement has ultimately been concluded with the Directors of he Irish Midland Great Western Railway Company, under which the line of the Galway and Kilkenny Railway will fall into the proposed extension of the Midland Great Western Railway from Mullingar to Galway, at or near to the town of Ballinasloe, subject nevertheless, to an equitable arrangement to be hereafter made for working the traffic of the Galway and Kilkenny railway Company over the portion of the Line between Ballinsloe and Galway.