The following ladies were all Roman Catholic Nuns, could read and write and were not married. Their ages and the place of birth are listed here. No guarantee is given that the following are accurate, as names listed in the street indices as filled out by the area enumerator often differ from those found on the census detail sheets (Form A) as filled out by the Head of Household.

On Sunday the 19th of June 1631, two boats were taken from Dungarvan, in Co. Waterford, each about 12 tons burden and went to the old head of Kinsale, Co. Cork

John Hackett the master of the first, from Dungarvan was ordered to bring his boat into Kinsale but he refused saying that the place was too hot for them, for besides the fort there was the King’s ships, and so the boats set sail for Baltimore, Co. Cork.

John Hackett was tried at the assises in Cork, condemned and executed for his part in this affair.

The Master of the second boat was Thomas Carew also from Dungarvan.

These boats had been pirated and were manned with Turks and Renagadoes. 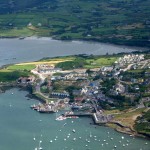 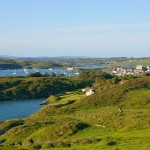 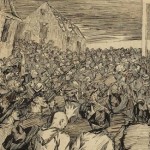 Jack B. Yeats’ The Sack of Baltimore

The following is an extract from the Annals of Kinsale:
“Hackett brought them to Baltimore about ten o’clock in the night, and they cast anchor on the east side of the harbour’s mouth, about a muskett shot from the shore, of whose coming none of the inhabitants had any notice, they came so late, for the sun setting they were seen, but not known, near Castlehaven. When they had moored their ships, the captain and ten Turks, with the said Edward Fawlett, a Christian captain, came in one of their boats into the said harbour, and they bound oacombe about their oars, least the noise might discover them. Fawlett piloted them along all the shore, and showed them how the town did stand, relating unto them where the most able men had their abode.

In this business they spent five glasses, when they came back aboard, they cheered up the rest of the company saying, we are in a good place and shall make a boon voyage. Then they consulted what time of night was fittest for their intended exploit, and concluded a little before day to be the most convenient season. Whereupon, about two of the clock in the morning they landed some two hundred and thirty musketeers, armed with firebrands, ready to set the houses on fire, prepared with iron bars to break open doors; they brought all their men in the two foresaid boats of Dungarvan and their own ship boats. These things were received by the confession of Hackett and Fawlett afterwards.

The 20 day of June, betwixt the hours of one and two in the morning, they landed their men, who divided themselves, some to one house, some to another, and so on a sudden surprised all of the houses on that part which is called the Cove to the number of 26, and carried with them young and old, out of their beds, to the number of 100 persons, and two they killed.Then the said Captain, leaving in ambush 60 musqueteers betwixt the said Cove and the town himself with about 120 or 140 Turks and one John Hackett an Irish Papist, presently assaulted the said town, when they in like manner surprised ten English Inhabitants, and had further proceeded (after breaking open 40 houses and rifeling of 37) had not one William Harris (wakened with the noise) discovered them to be Turks, and with divers shots in defence of himself wakened the rest of his neighbours, who beating the drum in the upper part of the town, caused the said Rice, with the rest of his company, presently to retrait to their aforesaid amush, and thence to their ship, where they continued at anchor until 3 or 4 o’clock of the afternoon.

On the day aforesaid, before it was light, news came to one Thomas Bennett by some that escaped of the first surprisal, who presently held a letter to Mr. James Salmon, of Castlehaven, praying him to use his best endeavours to persuade Mr. Pawlett, who then lay in the harbour with his ship, to haste to the rescue of the foresaid captives, who it seems could not prevail. Then Mr. Salmon presently, with all speed, sent to Captain Hooks, Captain of the King’s ship then riding in the harbour of Kinsale, informing him of the premises, and said Samuel Crooke likewise sent a letter to the Sovereign of Kinsale, manifesting the calamities aforesaid, and praying him to hasten the captain of the King’s ship to their rescue. Mr. Salmon’s man, by his direction, went also from Kinsale to Mallow, to inform the Lo. President of the premises who presently sent his commands to the Sovereign of Kinsale and Capt. Hook to set forth with the King’s ship and to hasten her to the service, who came accordingly within a few days. But the Turks not continued in the harbour longer than they could bring in their anchor and hoyse sail, were gotten out of view, and the King’s ship followed after them , but could never get sight of them.

Endorsed:”The second relation of the Turk’s insolency done at Baltimore, which is more true and punctual than the former, this being attested by the Sovereign, the Burgesses and Sir Samuel Crooke, Baronet.

They have taken 9 Portingales, 3 Pallicians, 17 Frenchmen, 9 Englishmen of Dartmouth and 9 from two boats of Dungarvan, 47. The sum of all captives is 154

Thomas Osborne Davis wrote a poem about this event. “The Sack of Baltimore”