Lewis Topographical Dictionary of Ireland (1837) tells us “MIDLETON, an incorporated market and post-town, and a parish, in the barony of IMOKILLY, county of CORK, and province of MUNSTER, 13 miles (E.) from Cork, and 137 ½ (S. W.) from Dublin; containing 6599 inhabitants, of which number, 2034 are in the town. This place, called anciently Chore Abbey and Castrum Chor,…”

Also, “The living is a rectory and vicarage, in the diocese of Cloyne, and in the patronage of the Bishop; the tithes amount to £897. 16. 7. ……The church, erected in 1823 at an expense of £3000, a loan from the late Board of First Fruits, is a handsome structure, in the later English style, with an embattled tower crowned with pinnacles, and surmounted by a light and elegant spire, erected after a design and under the immediate superintendence of Messrs. Pain: it was recently repaired by aid of a grant of £202 from the Ecclesiastical Commissioners. In the churchyard is a mausoleum of grey marble, in the Grecian style, having in front a pediment resting on two lofty pillars, between which is a tablet of white marble, …”

These photographs were taken July 2014 and I’m afraid the gates of the church grounds were locked so I could get no closer. 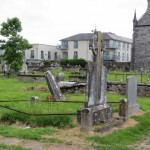 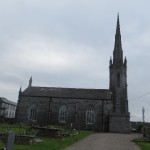 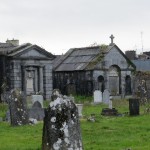 Also, “In the Roman Catholic divisions the parish is the head of a union or district, comprising also the parishes of Ballyspillane, Inchynebacky, Mogeeshy, and Ballyouteragh; the chapel, near the eastern extremity of the town, is a spacious edifice, and there is also a chapel at Ballintoretis.” 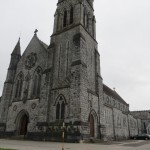 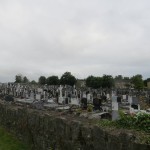 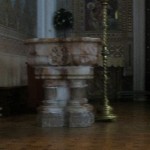 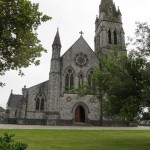 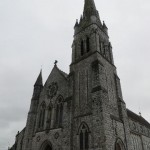