Of Urlingford, Lewis Topographical Dictionary (1837) tells us “URLINGFORD, a parish, in the barony of GALMOY, county of KILKENNY, and province of LEINSTER, 1 ¾ mile (S.) from Johnstown, to which it has a penny post; on the road from Kilkenny to Thurles, and on the mail coach road from Dublin to Cork, by Cashel; containing 2492 inhabitants, of which number, 1366 are in the village, which consists of a main street with a few offsets diverging from it, and contains 256 houses, mostly of inferior appearance.”

Also “In the R. C. divisions it is the head of a union or district, comprising also the parish of Tubrid-Britain, with parts of those of Burnchurch and Clomanto, in which union are two chapels; that of Urlingford is a very neat building. “

These photographs were taken Nov. 2006. 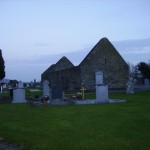 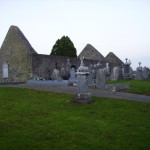