A friend of mine told me that one of the oldest gravestones in the Diocese of Ossory was in this graveyard one day – I said to him, “Eirke?  You mean that Protestant church I can see as I trip from Rathdowney to Johnstown, out there near Galmoy?”  His reply was that it had once been a Protestant church but had been consecrated and that he had gone to mass there as a child.

So me, being interested in graveyards, trotted out to this church one day and it is actually such a pretty location.  It’s Eirke and that’s in County Kilkenny, but it’s only a few miles from Rathdowney which is in County Laois and my friend, he lived out there in the Galmoy area, but he used to come to school in Rathdowney (that’s just a bit of news for you all as to how our counties and boundaries work.).  The first day I went out I just enjoyed the graveyard, it is so peaceful, I did take some photographs and I did find a stone dated 1713 and that is one of the oldest stones I have ever found (there is a 1600+ one over in Stradbally)…..

I didn’t find any stone older than that.  One day then I was talking to a friend of mine who is an undertaker and he asked me had I found that stone and told me it was dated 1530 – and of course when I heard that date I told myself “you have to find it”

Then, yesterday, off we went over again, a beautiful day.  I sent my friend a text asking him if he could tell me where the stone was – then as I stood in front of a grave trying to read the older part I turned around and spotted a date “1538”

This stone is labelled a ‘grave slab’ – it cannot be read.  It is enclosed and the marker that gives the date sits over the slab.

Grave slab of John Morris, Baunballinlough, and his wife Katherine. 1538: 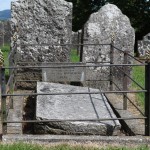 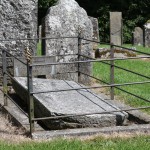 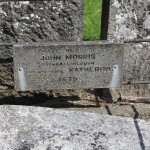