This is an index of the names of the people who were married in the Roman Catholic parish of Dunleckney (Bagenalstown, Newtown, Ballonkillen) during the year 1840.   The following table of marriages is transcribed from Microfilm No. 4195 held online by the National Library of Ireland accessible through their Roman Catholic Parish Register Search page.   All names and surnames given here are as I read them.  This section of the register is in English.

My list is sorted by the surname of the groom.  Question marks indicate letters or words I had a problem reading.  The letters ‘sic’ indicate that is how I read the letters I have typed.
[ ] indicates that the letters within the brackets are my best guess at what the letters might be.
I think there was an entry above that of James Brennan and Ann Neil which I could not read.  Mick Kearney and Ellen Lyons had Richard and Mary Lyons as their sponsors.

If you go to the page i have linked to below and are sitting at a PC and want to search the records for a surname that you are interested in then press Ctrl and F together.  A box will pop up for you to enter the characters you’d like to find on the page you are on. Pressing enter will bring you to the next entry for that name and so on.  My thanks to Clare Lawler Kilgallen who posted this information on a Facebook page.

If you are working with a Mac then press ⌘ & F and continue as above.

How do we deal with finding out that there are four townlands of the same name? How do we find out exactly which townland our family came from? How do we work out which records are of importance to us, actually refer to our family and not another family of the same surname? They are really the questions that have to be asked and dealt with.

Two 19th century land surveys are of importance in Irish Genealogical research because of destruction of pre-1901 census returns. These are the Tithe Applotment Books(c.1823-38) and the Griffiths Primary Valuation (1848-64).

The Tithe Applotment Book s and the Griffiths Primary Valuation employ administrative divisions some of which are no longer in use e.g. the Barony and the Civil parish.

The smallest division, the ‘townland’ can vary in size from a single acre to a few thousand acres. There are more than 64,000 townlands in the country of Ireland. They were used as the smallest geographical unit in the Tithe Applotment Books, the Griffiths Primary Valuation, census returns and are still in use today. Anything from 5 to 30+ townlands may be grouped together to form a civil parish. The civil parish is generally co-extensive with the Church of Ireland parish but NOT with the Roman Catholic parish. Roman Catholic Parishes are in general larger than civil parishes. Civil Parishes are collected together to form Baronies.

Each county has a number of townlands AND some counties have more than one townland of the same name, this can be very confusing for those who only have the name of the townland in a county that their ancestors came from.

What is the importance of the townland and how do I find out where in a county my townland lies?

The townland is used in the Tithe Applotment Books, Griffiths Primary Valuation , Census records and Civil Records. The area of land covered by each of the above mentioned resources can be different e.g. civil records can cover an area spread over two counties.

The spelling of the name of the townland can change from one to the other of the above mentioned resources, e.g. ‘Clough’ on the there are signposts which spell the name of this village as Clogh AND Clough.

The townland name as you know it may no longer be recognised as a townland whilst it was a townland in years gone by OR it may be a village now but in theory did not exist back in the past even as close back as the 1901 census e.g. Clough, Laois – there is no Clough listed in the 1901 census returns.

How do we deal with finding out that there are four townlands of the same name? How do we find out exactly which townland our family came from? How do we work out which records are of importance to us, actually refer to our family and not another family of the same surname? They are really the questions that have to be asked and dealt with.

A different step:  I know that the Dunne family I am looking for came from Newtown, in Co. Laois pre 1860 so I go to the 1901 census to see how many people of the Dunne surname live in Newtown in Co. Laois in 1901 I key in Dunne as the surname, I list Newtown as my townland, Queen’s Co. as my county and click search – I give NO forename and I give no other information on the search form.

What do I get as a return? 12 people of the surname Dunne in Newtown but NOT in County Laois (Queen’s Co.)!! These Dunnes are listed as living in Newtown in Co. Offaly (King’s Co.) – what happened the 4 Newtowns of Co. Laois – where are they, are there no people living in these townlands, or, have the four townlands disappeared?

Let’s go farther back with this search. Let’s try for
1. Dunne, in Newtown, which is located in the civil parish of Skirk in the Griffiths Primary Valuation and in Donaghmore Poor Law Union. The Griffiths was carried out in Laois in the late 1840’s-50
Result: Martin Dunne lives there in the Civil parish of Skirk, BUT he is listed as having property in Garranmaconly sharing a & b with Robert Fletcher – each set of property has a house on it
Then, we have Robert Fletcher and Martin Dunne leasing property to Bernard Cahill with a house on it, and Martin Dunne leasing land to James Walsh with a house & garden.
The townland of Skirk Glebe is also listed on this page and both of these townlands are in the civil parish of Skirk BUT there is no mention of the townland Newtown which is what I was looking for!

Second Search for 2. Dunne, Newtown in the civil parish of Aghmacart, Barony of Clarmallagh, Poor Law Union of Abbeyleix.
I get 11 references to the surname Dunne – but one of these is to a Catherine Whelan.

I still have 4 civil parishes listed. The Dunnes I am looking for were all Catholics, do I have 4 sets of Catholic parish records for pre 1860 is my next question. I have also to remember that the civil parish might not have a Catholic parish of the same name!!

Outside of Stradbally RC records, what else have I learned here. There is or was more than one townland called Newtown in Laois back in 1851 which date suits when my Dunne family left Laois.
I definitely have two sets of RC records to search for my Dunne family. 1. Stradbally and 2. Castletown
I also have a few other RC parishes to begin searching. 1. Borris in Ossory. 2. Durrow 3. Rathdowney 4. Johnstown (Kilkenny)

So, that’s some townland importance for you – I have not yet found which Newtown this Dunne family came from but I have cut it down to six sets of parish registers to search.

Lewis Topographical Dictionary of Ireland (1837) tells us that “AGHA, or AUGHA, a parish, in the barony of IDRONE EAST, county of CARLOW, and province of LEINSTER, comprising part of the market and post-town of Leighlin-bridge, and containing 1739 inhabitants. This parish is situated on the east side of the river Barrow, which is navigable to Waterford, and on the road from Carlow to Kilkenny.”  Also “In the R. C. (Roman Catholic) divisions it is partly in the union or district of Dunleckney, and partly in that of Old Leighlin: the chapel, situated at Newtown, is a handsome edifice lately erected. “

These photographs were taken 10th September 2014. 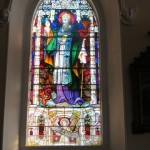 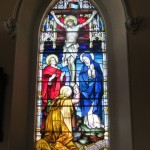 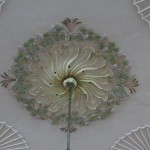 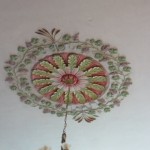 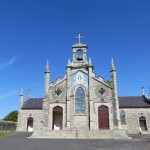 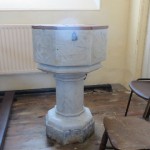