The record book with the names of children attending Sunday School at Thomastown, Co. Kilkenny is held by the Research section of the Kilkenny City Library. The following list of names has been transcribed from the book.

Thomastown Church Photographs, Co. Kildare. These photographs were taken by Dr. Jane Lyons in October of 2006. 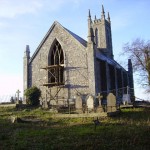 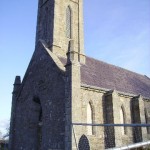 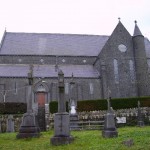 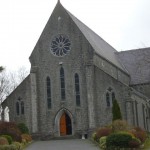 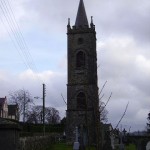 This page features civil Marriage Records for the district of Thomastown in Co. Kilkenny and includes full names (where possible), the year of marriage, and the quarter in which the marriage occurred. A searchable index of all available marriage records is available here.

Mrs. Mary Grace, publican, Market street, Thomastown was prosecuted for a similar offence on the same date.
William Kennedy, Ballyroe and John Hale, Morteen, Thomastown were summoned for being on the premises.
Constable Hennessy, in reply to head-constable Connell stated that on Sunday night, the 18th October, he called at Mrs. Grace’s premises at 8.30 o’clock. He was admitted to the shop by James Power, who was employed on the premises, and who was in charge of the door. On entering the shop he asked Power if he had any persons on the premises and he said “A few” but did not designate or or distinguish any person in particular. Witness opened the door of a snug on the left hand side of the shop door, and on looking in saw Hale and Kennedy there. Hale lived in the town of Thomastown, and Kennedy’s place of abode was about two miles from the publichouse. They were sitting in the snug, and there were four or five porter bottles and glass measures in front of them. Two of the glass measures were about three quarters full of porter. Hale tendered no explanation of his presence there, but Kennedy said he was after coming in from Kilkenny and that he came in for some refreshment. Daniel Grace, the publican’s brother in law was inside the bar, and witness drew his attention to Hale and kennedy, but he only looked at them and left the bar immediately. Patrick Grace, the publican’s son then came in.
Chairman: Is the publican here?
Witness: No.
Mr. Patrick Grace said that it being a fair day in Thomastown his mother was busy and could not come there, but he represented her.
Chairman: You cannot represent for her.
Mr. Grace: She was not there at all that day. We are the case ; we are not denying that the men were there.
Chairman : You cannot appear for your mother. You should appear by a solicitor if you wanted to appear at all.
The defendant saud that they were in Kilkenny that Sunday at Redmond’s Volunter Meeting and had nothing to eat or drink all day. He was out from 7 o’clock in the morning until late in the evening.
Chairman: Are you an old soldier?
Kennedy: Yes. Continuing, he said the Thomastown Volunteers “fell in” at 11 o’clock that Sunday morning at the school house and marched to the railway station. There was no room for them on the first or second trains to Kilkenny, and they had to remain on th platform until close to 2 o’clock. On arrival in Kilkenny, they again “fell in at the railway station and marched to the market where they were kept for about twent minutes to 6. That left them very little time before the departure of the train to get any refreshments in Kilkenny. We went into one public house – about one hundred of us – but there was no-one serving there but two women and some of us had to come without any drink. Some of them who wee in the back yeard said that the porter was rotten (laughter)
Chairman: Was that Mrs. Grace’s porter?
Kennedy: Oh, no, but the Kilkenny porter (laughter), and I said “If it is rotten for you it is rotten for me” (renewed laughter), so I came away without the drink. When I came to Thomastown I rapped at Mrs. Grace’s door and the man at the door asked who was there. I said “A Traveller”. He said “You are not a Traveller” and I said “I am Travelling all day” and “I think I am entitled to a drink”. He said then “Come in.” We had only one drink taken when the constable came in ; we were not two minutes in the public house.
Chairman: Is the oher man a volunteer also?
Kennedy: Yes, he belongs to the band and was beating the side-drum all day (laughter)
Replying to the Chairman, Sergeasnt Gormley said that on 5th March 1912, Mrs. Grace was convicted of a technical offence against the Licensing Laws and fined 2s. 6d., and costs.
Head-constable Connell said it was in defendants favour that the admitted the offence.
Mr. Patrick Grace : I did not know these men were in the shop at all that evening, and I told that to Consable Hennessy.
Constable Hennessy: That is so.
Kennedy: I can prove it if necessary that Mr. Grace did not know we were in the shop. I am already at a loss of 2s. for my coming here and I think that is enough punishment (laughter)
Chairman: The publican must be fined £1. It is the second offence and we cannot fine her less. The two gallant Volunteers seem to have been labouring under an impression that the had a right to have a drink there that evening, but they were wrong in so thinking. To show them we respect their doubt about it we will fine them 1s instead of 5s.
In reply to the Chariman, Head-constable Connell said that as the offence had been admitted he would not make an application to thave the conviction recorded on the publican’s licence.
Taken from ‘The Kilkenny People‘, November 7th, 1914

John Sheehy, publican, Market street, Thomastown, was charged by District Inspector Silcock with a breach of the Licensing Act on Sunday 18th October. Philip Lennon, Logan Street, Thomastown and Patrick Murphy, Market Street, do., were summoned for being found on Sheehy’s premises.

In the absence of Mr. Silcock, the case was conducted by head-constable Connell.

Constable Hennessy gave evidence to the effect that on Sunday 18th October, he was on duty in the town with Constable McCarthy. At 8-40 p.m. he called at Mr. Sheehy’s public house and demanded an admission. They were admitted through the hall door. After entering witness asked the publican’s assistant if he had any persons on the premises, and h said he had a few travelers. On going through the hall witness heard footsteps and a rush as if parties were hastily leaving the back kitchen or room and going towards the rere of the premises. He saw Mr. Sheehy, the publican, standing at an outhouse door, and asked him had he any persons on the premises, and he said he had a few travelers at the bar. He asked him was there any person in the outhouse, and he replied that there was not and that witness need not go look for anybody in there. Witness went into the back house, which was in darkness, he lit a match and saw Philip Lennon and Patrick Murphy crouched up in a corner against the wall, hiding. He called them out and asked them how could they account for their presence there ; they gave no explanation but subsequently said they were invited in. Defendant was present, and when asked by the witness to account for the presence of the two men on his premises he said that he had invited them in for a drnk.

Chairman (Mr. Creaghe) :It was a very odd place indeed, to put his guests (laughter)
Witness said: the bar was open and lighted. There were people there whom witness satisfied himself were travelers.
Publican: Did you see these men going into the store when you were coming in?
Witness: No
Chairman: He found them there, and that is all that matters.
Constable McCarthy corroborated the evidence of the previous witness

A boy named Michael Walsh was examined for the defence, and stated that on the Sunday evening in question he was present when r. Sheehy invited Lennon and Murphy in for a drink.
Head-constable: What time was that?
Witness: About 8 o’clock or so. The four of us were standing together at the time outside Mr. Sheehy’s door.
Chairman: Were you invited in?
Witness: No, I was not (laughter), but I was present when the two men were invited in by Mr. Sheehy, and I then walked away.
The defendant Lennon said he was invited in.
Chairman: What is the character of this house?
Head-constable Connell: Mr. Sheehy is not long a publican. The house has been well conducted since he came there.
Chairman: Is this his first offence?
Head-constable Connell : It is.
Chairman: He did not improve his position by telling so many lies about these boys. They undoubtedly were in there when they had no business to be there. If they were bone fide guests hey would not have gone and concealed themselves in the outhouse. I don’t believe a word of the evidence of that boy who was examined for the defence.
Sergeant Gormley said that Mr. Sheehy only got the licence for the premises six months ago when a transfer was granted to him from a man named Cuddihy.
Chairman: It is your first offence and I hope you won’t have another offence against you for a long time. It is just as well for you to take a wrinkle from what I say, and that is when the police visit your house and find you doing wrong you ought to tel them the truth. A man who comes before us and tells the truth – an honest man who admits he has committed a crime – gets out of it better than the man who tells lies. You will be fined 10s. and costs for this offence, and the two men found on the premised will be fined 5s. each.
Taken from ‘The Kilkenny People‘, November 7th, 1914

At the Thomastown Petty Sessions on Tuesday last, the Chairman (Mr. P. C. Creaghe, R.M.) said: – “Before beginning the business of the court I desire to say that my three brother magistrates and I regret that we are the only representatives of a generally large bench of magistrates here, but such as we are we would like to express in the most public way possible our deep sympathy with Major J. H. Connellan and his family, and young Mrs. Connellan, widow of Major Peter Conellan. I am sure that everyone who knows Major Connellan must feel as we do here today, the deepest sympathy with him in this great trial that has been sent to him. Major Peter Connellan has died a glorious death which any of us – if we were given a choice on how to die – would certainly choose: he died for the sake of the Empire and his country. But, death always leaves its bereavement and sorrow, and so in the bereavement and sorrow that has fallen on Major Connellan and his family we as brother magistrates, wish to offer him our sincere sympathy and condolence.
Mr. Shannon, C.P.S., said he desired to be associated with his worship’s remarks.
Head Constable Connell – On behalf of the police, I wish to be permitted to associate myself with your worship’s kindly reference to Major Connellan’s death.
Mr. S. C. Webb, solicitor – On behalf of the solicitors’ profession I would like to associate myself with everything that your worship has said, and to say that we wish to extend out heartfelt sympathy to Major Connellan and Mrs. Connellan in their very terrible bereavement.