According to the Lewis Topographical Dictionary of Ireland (1837) :”CASTLE-DERMOT, a post-town and parish (formerly a market-town), in the barony of KILKEA and MOONE, county of KILDARE, and province of LEINSTER, 7 ¼ miles (S. E. by E.) from Athy, and 34 (S. W. by S.) from Dublin; containing 3634 inhabitants, of which number, 1385 are in the town. This place, called anciently Diseart-Diarmuda, and afterwards Tristle-Dermot, appears to have derived its origin from an abbey founded here for Canons Regular, about the year 500, by St. Diermit, which was plundered by the Danes in 843, and again in 1040.”

Also “In the R. C. (Roman Catholic) divisions this parish is the head of a union or district, comprising the parishes of Castledermot, Moone, Timolin, Kilkea, Killelan, Dunmanogue, Grangerosnolvin, and Kinneagh, and part of the parish of Graney; there are three chapels in the union, one in this parish, a spacious edifice combining various styles of architecture, and one each at Moone and Levitstown. “ 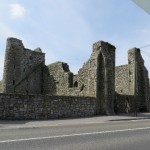 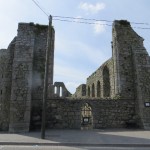 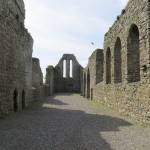